Dust on a Scale

We all have a set of standards we use to judge things, and usually those standards are highly interconnected with our emotions and feelings. The Bible often uses scales or balances to represent this process of judgment or decision making. On one side of the scale or balance we have what we are judging and on the other side the weights (our standards, emotions, feelings, etc.). We judge our behaviors, the behaviors of others, the value of actions, people, political choices, all kinds of things. Our standards, emotions, and feelings are the weights we usually use on this scale. We might put someone's behavior on one side of the scale, then the weights (our standards and feelings) on the other side. And we make some type of value judgment depending on how it all balances out. 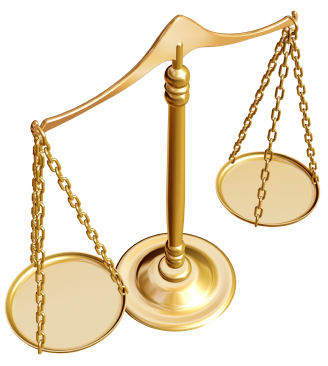 There is a scripture in Isaiah.

15 Surely the nations are like a drop in a bucket;
they are regarded as dust on the scales;
he weighs the islands as though they were fine dust.

The Hebrew word for "dust" in this verse is often translated as cloud or sky in the Old Testament. The picture here is that the nations basically carry no weight when it comes to God's decisions and judgments. At the most God might blow the dust off the scale when weighing something; or he might just ignore the dust. His decisions are not swayed or affected by the dust.

The concept of a nation is fairly broad and within that concept we have things like governments, communities, neighborhoods, careers, families, and ourselves. We also have things like freedoms, rights, responsibilities, citizenship. And here is the point of all this. For our scales to be accurate and just in God's sight all of these things must become dust on our scales. The only weights we can use and have accurate scales are God's weights. This takes a lot of self-honesty. Often we will tell ourselves we are using God's weights when we are just catering to our own desires.

I fully believe Jesus loves me. I believe he loved his mother and brothers. I believe he loved Israel. But his actions were based on obedience to God. That doesn't mean he wouldn't do things for his mother and loved ones. But he never compromised his obedience to God in the process. He loves me, but that love for me is still dust on his scales. He loved his mother but that love was dust on his scales. He loved Israel and I am sure he was well aware of what the Romans had done and were doing to his people; of the slaughter of infants, children, and adults. But that was dust on his scales and he stayed true to preaching a kingdom that is not of this world.

His decisions and judgments were made using God's weights, not his own.

This can be a hard thing but it is a very important thing. As Jesus' disciples we have to take up our cross daily and learn to make all our standards, emotions, and feelings as dust on our scales. I love my family. That will not change and most of my life is centered on taking care of them. But my feelings for them must be dust on my scale. I submit my judgments and decisions to God in the hope that I can live my life using his weights. When I use my own weights my scales (judgments and decisions) become false. And God doesn't like false weights.

Make the nations as dust on your scales.

In the book of Hebrews there is a passage describing an alter or table that we have to eat from. What we partake of is the sacrifice of God; Jesus. As we partake of him we share in his sacrifice and in his suffering.

9Do not be carried away by all kinds of strange teachings. It is good for our hearts to be strengthened by grace, not by ceremonial foods, which are of no value to those who eat them. 10We have an altar from which those who minister at the tabernacle have no right to eat.

11The high priest carries the blood of animals into the Most Holy Place as a sin offering, but the bodies are burned outside the camp. 12And so Jesus also suffered outside the city gate to make the people holy through his own blood. 13Let us, then, go to him outside the camp, bearing the disgrace he bore. 14For here we do not have an enduring city, but we are looking for the city that is to come.

There is a passage in Luke that gives an indication of the power of the crumbs or scrapes from this table.

24Jesus left that place and went to the vicinity of Tyre. He entered a house and did not want anyone to know it; yet he could not keep his presence secret. 25In fact, as soon as she heard about him, a woman whose little daughter was possessed by an evil spirit came and fell at his feet. 26The woman was a Greek, born in Syrian Phoenicia. She begged Jesus to drive the demon out of her daughter.

27"First let the children eat all they want," he told her, "for it is not right to take the children's bread and toss it to their dogs."

28"Yes, Lord," she replied, "but even the dogs under the table eat the children's crumbs."

29Then he told her, "For such a reply, you may go; the demon has left your daughter."

30She went home and found her child lying on the bed, and the demon gone.

If all we had available were these table scrapes then it would be amazing. We would have deliverance and healing. But all of us now have more than scrapes and crumbs available. We can eat at the table, at the alter of God. We can have communion with the Father and with Jesus and with the Holy Spirit.

Many people want to live off the table scrapes. The lady above had a great heart toward her daughter and great faith and humility. She was willing to be considered a dog if it helped her daughter. Jesus honored all of this in her and spoke deliverance to her. She went back home to a daughter who was healed and delivered. And I am sure she was very, very thankful. This really was an amazing thing that happened. And there are a lot of amazing things that happen to people who have a lot of faith and humility and live off the table scrapes.

In the passage from Hebrews quoted above it says:

12And so Jesus also suffered outside the city gate to make the people holy through his own blood. 13Let us, then, go to him outside the camp, bearing the disgrace he bore. 14For here we do not have an enduring city, but we are looking for the city that is to come.

Don't settle for table scrapes. Come outside the camp and fellowship with Jesus. Walk with him, share your heart with him and let him share his heart with you. And share in his disgrace. There is still healing and deliverance but knowing Jesus is so much more.

Eat more than just the crumbs.

In Ezekiel 9 there is a record of God bringing judgment upon his people. He has those who are grieved by the unfaithfulness and abominations marked so the destroyer will leave them alone. Judgment is sent to the rest.

When Ezekiel falls before the LORD and asks about this outpouring of wrath God answers:

He answered me, "The sin of the house of Israel and Judah is exceedingly great; the land is full of bloodshed and the city is full of injustice. They say, 'The LORD has forsaken the land; the LORD does not see.'

There is a road that we can start waking down that does not end up in a good place. And that road starts with the feelings and belief that God has forsaken us, that he doesn't see what we are going through.  By implication we feel that he doesn't care about us. Often as we walk down that road we start to allow sin to dwell in our lives. And when sin comes in it can create a hold on us. We aren't stuck there; Jesus paid the price for our deliverance but we have to take hold of that deliverance.

6And without faith it is impossible to please God, because anyone who comes to him must believe that he exists and that he rewards those who earnestly seek him.

Be thankful and full of faith that God has not deserted you and that he sees you.

6Are not five sparrows sold for two pennies? Yet not one of them is forgotten by God. 7Indeed, the very hairs of your head are all numbered. Don't be afraid; you are worth more than many sparrows.